We absolutely couldn't have picked a better day for the Prosound Shootout. The weather was clear, no wind, temperature about 65º when we arrived at the track, warmed to the low 80's in the afternoon. We all got some sun, that's for sure.

There were a couple of no-shows, and at first that kind of bummed me out. But after we got going, I realized that we would be pressed for time if everyone had showed. Even as it was, we had to leave out the heat soak part of the test. Those of you that run your equipment at high power levels longer than a couple hours know the results of heat soak, so it is an important metric to quantify. Speakers driven to high power levels have a life expectancy that's inversely proportional to both power and time. There is a sort of thermal de-rating that sets in over the duration of a high-power event. But measuring this and quantifying it takes time, and is probably better left to measure in another venue and not at an event like this.

The systems that were there were all winners. I was pretty amazed at the level of performance displayed. The Tuba 24 is tiny as hornsubs go, measuring only 8 cubic feet (2'x2'x2') and it packed a punch. Leland Crooks was able to pick it up easily, and yet it still had useable response down to 40Hz and sounded very powerful. The Bassmaxx horn was incredibly flat. From 70Hz to 140Hz, the amplitude response was perfectly flat. It was amazing, basshorns don't have that kind of response. A straight diagonal line (easily EQ'ed) up to 70Hz, and then perfectly flat out to the upper cutoff point. David Lee was understandably pleased, and Johan Van Zyl will be proud when he sees the data too. And my 12π basshorn performed very well, exceeding my expectations. A single 12π basshorn generated 118dB at 10 meters, which is equivalent to 138dB at 1 meter. From this, I would expect a pair of horns to provide 144dB and four horns should produce 150dB. The speakers were pulled out 60 feet from the stands, and the test computer and amplifiers were a few feet away. The test microphone was run 10 meters out and sat on a pad directly on the ground.

We had written a detailed test plan, and we stuck to it. That made the measurements go just like clockwork. The first thing we did was to measure the ambient sound, to get a baseline. The graph shown below is the noise floor for all tests. When the response curve dips below this line, the data becomes ambiguous. This is particularly true of the distortion test. We did a noise floor measurement for both filter setups used to measure SPL and distortion, but they are both fairly close. So the chart below is the noise floor for all of the datasets measured at the Prosound Shootout.

The next thing we did was to measure impedance for the loudspeaker under test. Not only was this information recorded, but we also used it to determine voltage levels needed to drive the speaker to specific power levels. This was one place where data interpretation was somewhat flexible, since impedance is not constant through the passband.

As an example, look at the Bassmaxx impedance curve. All horn loudspeakers have peaks, some larger than others. But the point is, you don't have a uniform impedance, and you don't even really have a good average value. Impedance through most of the passband is relatively low, with a few large peaks. I'm not sure it makes sense to consider impedance to be greater, although the average value most certainly is. At any rate, we would all be using the same metric, so we simply had to agree upon one and David Lee suggested using Zmin, and we all agreed. 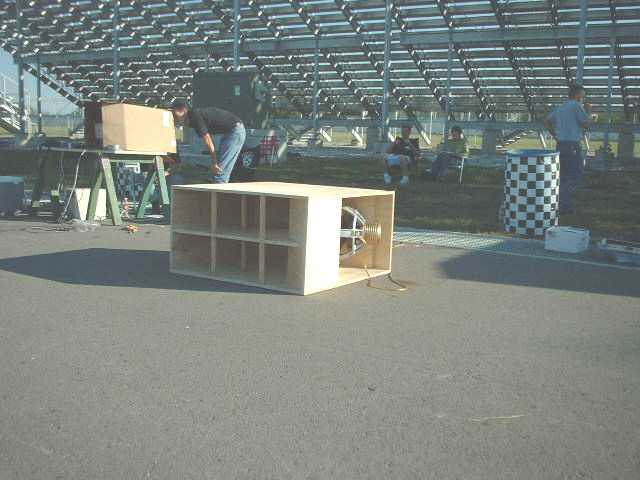 In each case, we measured at 28.28v. This generates 100 watts for 8 ohm loads, a little more for lower impedance loads and a little less for higher impedance loads. But it was the one absolute voltage level that we picked for all loudspeakers to be tested with. Since we measured 10 meters away, the SPL value obtained also corresponds to 2.83v/1m.

Using the Zmin value obtained from the impedance chart, we calculated voltage levels required to drive the speaker to 100 watts, 200 watts, 400 watts, and so on. We performed SPL and distortion measurements at each of these levels for every speaker, up to whatever power level the owner was comfortable with. Since my 12π basshorn was a proof-of-concept prototype, I wanted to push it to the point of failure, and to determine whether its limits were due to mechanical or thermal failure. Others participants were more conservative. 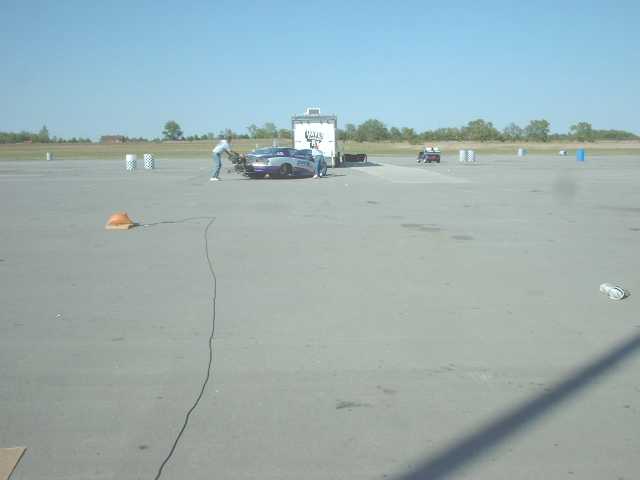